I think perhaps I've found the cause of this issue, I had set the date around the wrong way (I did the English default way

I've encountered a strange graphical issue with my game mode - Pirate's Lagoon. It is whenever I move, the shadows or perhaps ambient occlusion on literally every tree / plant that casts a shadow, glitches from light to dark repeatedly, making it very graphically noticeable. Strangely, this issue is isolated to that game mode for me, as it does not happen at all with the regular game modes such as explore etc. The Yland was generated in the editor, with the following settings and has numerous very thick forest / jungle areas: 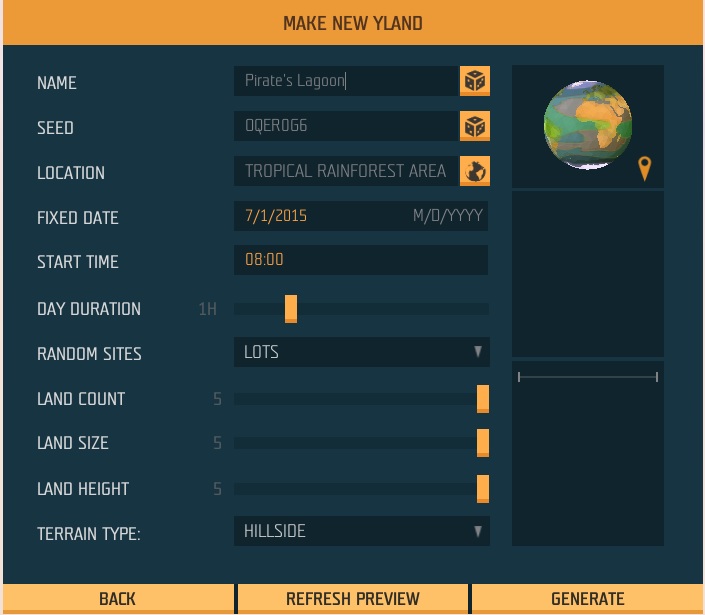 *The fixed date was actually set to 27/7/2017, rather than the default as shown, and I'm not sure how to find the coordinates used for it, though that was not as shown either.

Worth noting that I haven't spawned a single tree / plant myself, they were created by the generator, however, I have spawned numerous objects and items, some in close proximity or even attached to trees (skeleton pinned to a tree with a spear and arrows, with a hat on etc). I have also spawned a lot of extra animals over the map, and in selected areas. I guess any of these things could be responsible?

A picture won't really show it glitching, so I made a GIF, however, if you want to see it yourself, I would imagine this is not isolated to my graphics card / system, and may be worth trying the game mode or generating it to see. It does this anywhere on the Yland, during any daylight hour (night time no shadows, can't notice! With a Ylandium Torch equipped, I can't notice it doing any glitching).

Further worth noting is this only happens when I move the mouse, or press the movement keys, if I stand still, the plants all sway to-and-fro without any glitching, likewise the shadows from those movements don't glitch.

Just in-case it is card related, my specs:

I was hoping to record some footage of the game mode, but this has proved to be an issue! Further, I've tried adjusting all the graphics options, from low to ultra, with no success.

0 replies to this bug / suggestion