What happened to this great game?

I remember playing this game in the really early days and loving it so much. The graphics were fantastic and I loved the core gameplay. I really felt like Bohemia interactive was onto something really special with this game and I wanted to support it.

It was clear that they were going to make a really friendly and charming survival game with an interesting editor so you can add stuff to it: 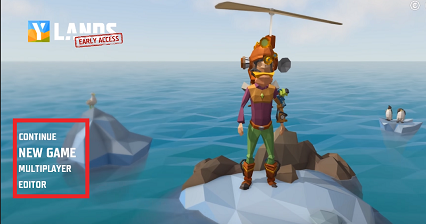 Explore was the game

It was clear a lot of work needed to be done on the game but I was excited to see it come into it own. Patch after patch my excitement grew with what this game would become.

However, about a year ago it became clear that rather than fixing the fundamental problems with the game they were focusing on expanding it.

Step by step this game moved away from being an interesting survival game to something more. At this point I was still really interested but it became apparent that even after saying that they have fixed the bugs, especially with servers, the bugs were not getting fixed. Our bug reports seemed to get ignored and calls do something fell on deaf ears.

Explore relegated to a small square.

Today the bugs remain unfixed but my bigger concern is the direction of the game. Rather than finishing a tremendous survival game by fixings its bugs, the game is transitioning to some sort of mobile/social game with in-game monetization.

You were building something so amazing. We were all on board for that but now we hear of a mobile game that may not even include explore? 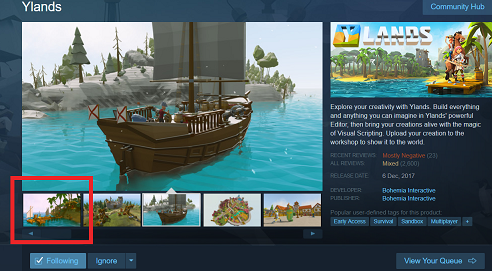 What your transition feels like to the community is replacing promise-fulfillment with more promises. People are going to stop believing you if you don’t finish what you begin before moving on to the next thing. 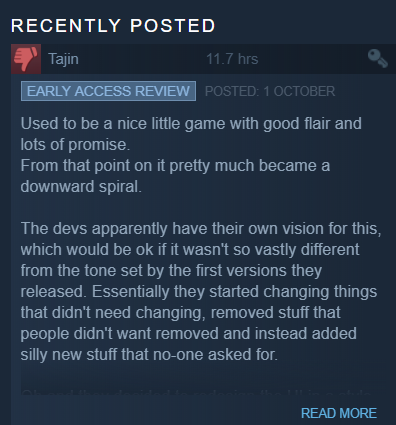 Fixing the bugs is no longer the major issue for us, the major issue is that you're creating a totally different game than the one we signed up for. We have been waiting, spending time, hoping for years for the promise of this great game.

I know that we're just players and it doesn't seem like a big deal but we invest ourselves in these games, the creations we make in the thousands of hours we spend. We did that because we saw incredible promise in a game you no longer support.

I think you're making a devastating mistake to add monetization and mobile support before fixing the very core basics of this game.

The game has been in a terrible state for years. Rather than fixing the bugs the developers are creating more features and what seems like a whole new game, all while promising to release this year. 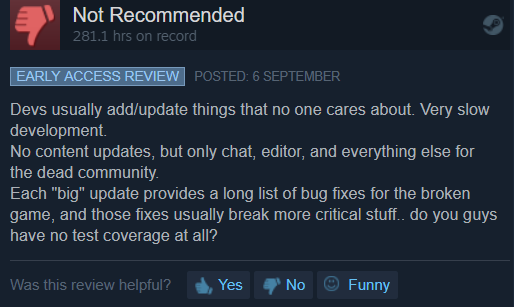